Montgomery tubercles, also known as Montgomery glands, are raised white bumps that look similar to goosebumps on the nipple and surrounding areola. They are named after William Fetherstone Montgomery, an Irish physician and obstetrician who first described them in 1837. Although it is fair to assume that many thousands of women, over many generations, have been aware of their existence well before then!

In this article, we will take a closer look at what Montgomery tubercles are, what causes them and how they function. We also have some tips for how to recognise when the tubercles are normal or when they may signal a problem.

What are Montgomery tubercles?

Tubercles are sebaceous glands, which you have all over your body but are particularly active in some specific areas. Their basic function is to lubricate and protect the skin. These are the same glands that produce the natural lubrication that makes hair supple, or greasy if left unwashed, and can cause oily skin, especially during puberty.  These glands are only known as Montgomery tubercles when they are on the nipples and areolas of your breasts. Here, they have a similar function, producing secretions which are rich in moisturising lipids to lubricate the skin of the nipples and provide a protective oily barrier to guard against infection. 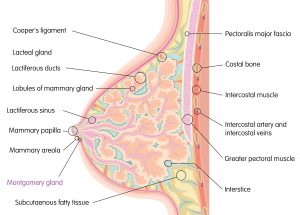 We all know that breasts and nipples come in a very wide variety of shapes and sizes, and the same goes for Montgomery tubercles. These tubercles may vary in number from only one or two to as many as 30. The number of areolar glands can also increase in response to hormonal changes – the most obvious example being pregnancy.

While Montgomery tubercles can be an early sign of pregnancy, this is not experienced by all pregnant women. Studies have shown between 30% and 50% of pregnant women notice these tubercles and when they do occur, they can be one of the very first signs, even before a missed period. Of course, nobody should take the sudden appearance of Montgomery tubercles as an isolated confirmation of pregnancy. It’s important to look out for other, more common symptoms, such as:

If you would like to learn more, you can read about the early signs of pregnancy here. If you’ve noticed one or more of these symptoms, as well as a missed period, you should get a pregnancy test. If the result is positive, it’s best to consult your GP as soon as possible.

Even if you’re not pregnant, it is still common to notice Montgomery tubercles around your nipples or surrounding areola. These are usually quite normal and nothing to worry about. Areolar glands can become more pronounced as a result of non pregnancy-related causes, such as:

Montgomery tubercles during and after pregnancy

Even if Montgomery tubercles are not one of your early signs of pregnancy, you are quite likely to notice them later on as the pregnancy progresses. Your nipples will probably darken in colour, and you might notice some of these raised spots on your breasts as your body prepares for lactation and breastfeeding. This is completely normal and should not cause any concern. The glands naturally become enlarged during pregnancy in response to hormonal changes. Their functions include:

Clearly, Montgomery tubercles have an important function for both for the comfort of the mother and the health of the baby. If you are expecting, you can help to keep these functions healthy by following a few guidelines:

Normally, Montgomery tubercles do not need to be monitored too closely. These swollen glands can be filled with a waxy substance, giving them the appearance of a spot or a pimple with a yellowish or white head. These are harmless. You should avoid squeezing, popping or trying to unclog Montgomery glands because this could lead to infection or skin injury.

Sometimes, Montgomery glands can become blocked, inflamed or infected. The signs would be a painful swelling or inflammation around the nipple and areolar area. Itching or a rash could also be symptoms of a yeast infection.

If you have any of these symptoms and you are not breastfeeding, or if you have a discharge of blood or pus at any time, you should see your GP as these could be signs of a more serious underlying condition.

What is a Montgomery cyst?

In rare cases, a Montgomery cyst can develop as a result of a clogged gland. This is also known as a retroareolar cyst. A Montgomery cyst can be painless and you may not even notice it. In most cases, they resolve on their own without treatment within 90 days. However, symptoms such as breast pain, inflammation or swelling can be a sign of infection.

If you are experiencing a sign of infection, an ultrasound scan will be used to diagnose a cyst of Montgomery. While these cysts do not require medical management in most cases, your doctor may recommend antibiotics or anti-inflammation medication depending on your symptoms. If the cyst is very infected, it may need to be drained using a needle and a syringe. Surgical management of a cyst in the Montgomery gland, such as breast segmentectomy, is uncommon but may be required if the cyst persists.

Pregnant or not, you’ll certainly have these glands in your nipples and areolas, whether they’re visible or sometimes escaping notice. They are completely normal and natural, and have a positive role to play in pregnancy and post-pregnancy. Take a look, you may find they have been there all along!